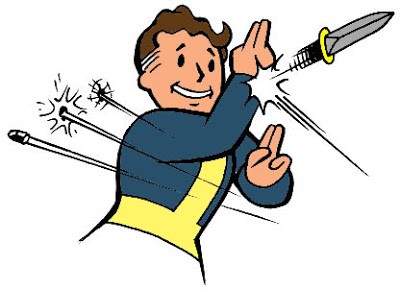 I am a big Merlin fan and the my favorite episodes involved Merlin outsmarting the Camelot guards. On several occasions Merlin needs to sneak past the guards to visit the Great Dragon or free Arthur from the dungeon. One time, at the entrance to the dungeon sat two fearsome guards playing a game of dice. Cunningly, Merlin used his magical powers to knock their dice far away – when they unsuspectingly went to retrieve their dice, he successfully snuck into the cells.

I couldn’t find the exact clip but here’s a typical example of his dealings with the Camelot guards.

The dice scene I described above is the epitome of a deflection – you distract an enemy piece (often by a sacrifice) so it can no longer defend and do it’s duty.

Because the end result of a deflection is usually to mount a serious attack on the enemy King, you can sacrifice boatloads of material in your effort to deflect the enemy pieces from their duty of protecting the King.

For example, one of the most common deflections is to distract the f6 Knight from protecting the key h7 square from mating attacks. Can you find the deflection in the next example?

White was winning in all lines. Technically, the above example only worked because Nd5 forked the Black Queen and Knight. This shows that combining tactics can often lead to powerful combinations.

Overloading is a very similar motif to deflections. If one piece has too many defensive tasks, it will inevitably fail at one of them. The principle of overloading can be seen in the following game between GM Liviu-Dieter Nisipeanu and GM Anish Giri.

Another famous treat is found in Krasenkow-Karpov, 2003 on move 31.

GM Ben Finegold has an excellent video on the overloaded pieces. Finegold is an incredible teacher and practically a stand-up comedian! I highly recommend watching any videos by him.

In sum, the deflection is a nifty tactic that most players forget about but can win many games. Deflection are often high risk (because you sacrifice pieces) but high reward (because you can checkmate or win material).

Make sure to wow your opponents with your newfound knowledge and post your best deflection or overloads on Instagram with #EpicTactics.

Anonymous artist from PomoZone. All credits go to them.